A year or two ago, I finished up My Series of Monster Guides by posting a terrible article about the Jersey Devil I had carelessly dashed off in an afternoon. This has always bothered me. Surely this was no way to treat a possibly somewhat-entertaining series of guides about monsters. There had to be another way. And then it dawned on me: There WAS another way. I could continue to write pointless and sort of crappy guides about various types of monsters! So that’s what I did.

So I hope you’ll join me for this look at Medusas and Minotaurs (part [?] of a [?] part series). Thank you and thank you. 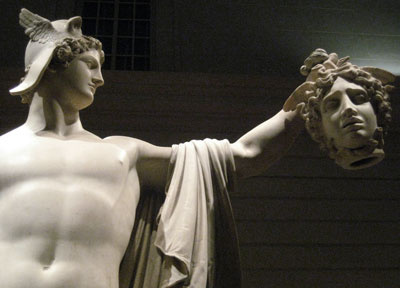 All the ancient Greeks agreed that as far as half-snake women went, Medusa was not half bad. She had a pretty face, and a decent rack, and a head of somewhat spectacular hair. So obviously there were always a bunch of sweaty Greek guys around trying to win her over, but she was having none of it. This pissed the Greeks off something feirce, but what were they gonna do? The girl and her sisters were tough, and the guys weren’t all that eager to get their eyes clawed over a piece of tail. Medusa doesn’t care. She’s a strong independent Gorgon who doesn’t need to rely on some pork-juice-swilling Greek to make her way in the world.

But then one day Poseidon (“God Of The Sea…perhaps you’ve heard of me?”) pays a little visit to Medusa’s temple. He takes one look at her and goes insane with lust. Eventually, Poseidon slips Medusa some Rohypnol, does his thing (Gods will be Gods, I suppose), and the next morning she’s waking up alone with a killer headache, clumps of brut-smelling seaweed in her hair, and a uterus full of godly spermatozoa.

Word of this gets around the Athena (Goddess & Sole Proprietor of the temple in which the deed took place), who goes ape. “How dare this woman allow herself to be violated by a god in my temple!” she screams, sweeping an armful of papers off her desk in a fury. As punishment for her “crimes” Athena transforms Medusa into a horrible snake-haired beast who turns anyone who looks at her into stone. Hey, it’s only fair, right?

So Medusa mopes around for a few years, grumbling and making statues, until finally some guy named Perseus comes along and lops off her head. And that’s that. 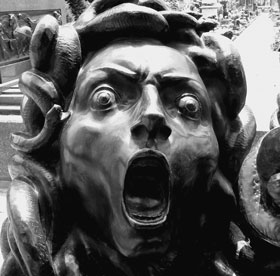 Sure, everyone knows that Medusa has the power to turn anyone who looks at her into stone, but few people actually stop to question the logistics of how this might work. In the original story, Perseus is able to defeat her by looking at her reflection instead of gazing upon her directly, but the Greeks don’t give much detail on why this even works.

So anyway, I am unclear on how the following items would effect Medusa’s stone gaze, so if there are any Medusaic scholars out there who might be able to provide some insight into these, I would very much appreciate it.

If you looked at Medusa through night-vision goggles, would you still turn to stone? I suppose it might depend on the sort of goggle or lens you are using. I am also unclear on what effect–if any–a pair of binoculars would have. Would the magnification between lenses render the stone gaze ineffective, or would it simply speed up the process? If so, if you looked at her through the wrong end of the binoculars, would you turn to stone more slowly? It is difficult to say.

If you were to stare into the face of a Medusa in a pitch black room, would you still be turned to stone? I get conflicting information from my sources on this time. Some say that her power is dependant on you actually “seeing” her directly (which would explain why they blind are unaffected), but others claim that even in the dark, the mere fact that you were looking in her direction (though you see nothing) will still cause you to turn to stone. In my opinion, neither explanation is satisfactory. The former makes little logical sense, while the latter seems sort of cheap, even for a monster. But then again, what do I know.

While many older periscopes use a series of mirrors (which would certainly provide as much, if not more, protection than a single mirror) there are slightly more advanced models which operate using prisms. Would refraction through a prism be just as effective as reflection to nullify Medusa’s stone power? And what of fiber optics and other such transmission methods which are sometimes utilized in modern periscopes? Surely viewing a medusa through this medium would not turn a man to stone. I suppose we will never know for sure.

Here are a few other things which may or may not reduce your likelihood of being turned to stone while looking at Medusa: One-Way Mirrors, Sleepwalking, Tinted Contact Lenses, Being Underwater, Progressive Myopia, An Open-Eyed Semivegatative State. 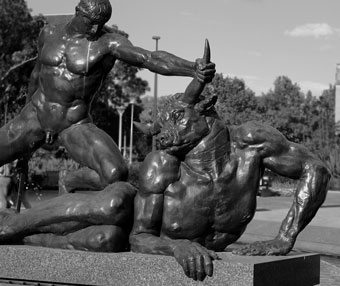 Some dude named Minos asked the asshole god Poseidon for a fancy white bull. Poseidon gave him the bull, but instead of sacrificing it like he was SUPPOSED to, he decided to keep it as a pet. Poseidon got pissed off, muttered “I’ll show this ungrateful little shit what’s what”, and waved his godly fingers, causing Minos’s wife to become sexually attracted the bull. She built a fake wooden bull, climbed inside, and called the Fancy White Bull over so it could…well…you know…with her.

Nine months later, out pops a kid. And wouldn’t you know it? The kid was half-bull. They decided to call him a Minotaur (because hey: why not) and they lived happily together for a while. But alas, as is all too often the case with bull/child hybrids, the Minotaur eventually became uncontrollable and began to devour humans. So Minos (who was still apparently in the picture, talk about a dedicated father) decided to build an enormous labyrinth for the kid (who must’ve been bad at mazes) to live in. A couple years later, some cat named Theseus wandered into the labyrinth and butchered the Minotaur up. And that was that.

Monster Power: The Ability To Possess The Head Of A Bull 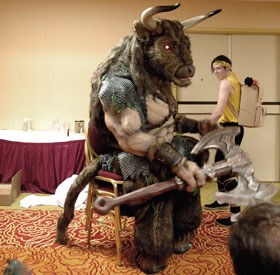 Poor Minotaur. While other Greek monsters are flying around breathing fire and turning little kids to stone, this kid gets stuck walking around with the head of a bull. I say the head of a bull because that’s the way the Minotaur is most commonly portrayed: Top half bull, bottom half human. Sure, it’s possible that the Minotaur was just some guy with a bull’s legs, but is that really much better? At least with the top half you get horns. With the bottom half all you’ve got are hooves, a swishy tail to swat away flies, and a huge set of bull genitals. No thanks.

Some people like to claim that the Minotaur had super strength, but I don’t see any evidence of that in the original story. The only messed up thing they really mention him doing is eating humans, which doesn’t even really make sense. Sure, bulls are said to have bad tempers, but are they really known for their bloodthirsty, human-devouring ways? Not exactly. But whatever. I’m not gonna blame a guy who was born with the head of a bull for partaking in some mild to moderate semicannibalism. Hell, I even consider it from time to time, and I’m only 3/8ths bull.

I’d like to apologize for potentially misleading readers by including the word “worthless” in the title of the above article. Looking over it again, I see that I’ve managed to include a fair number of actual “historical facts” in the text, while simultaneously failing to incorporate any of the ridiculous made-up statements which have characterized my Worthless Monster Guides thus far. Let me assure you: This was not my intent at the outset.

But what’s done is done. There is little I can do to change the mildly educational nature of this guide at this point. For you see, as I am am typing this out on one of those early word proccxessors witch doesn’t allow 5r you to edit. There shall and be no going back at thisp oint.

Thanks youa for reading and i hope you hadv learnt something!,