When pressed for “evidence” to back up her claims, she was unable to produce even a single shred. This of course led to cries of “irresponsible journalism” and “fear-mongering” among pro-rape advocates in the gaming industry, but the more educated among us know that those who constantly clamor for reputable scientific studies to back up what appear to be unsubstantiated and outrageous claims are missing the point: Violent videogames exist, and until they are successfully banned, our children will continue commit acts of violence, torture, embezzlement, and premarital assault.

But what of Bulletstorm specifically? Is this game truly as reprehensible as so many have claimed? The answer, of course, is a wholehearted and undeniable “yes.” 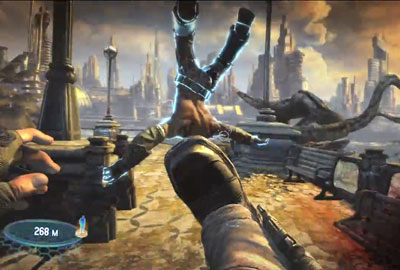 I won’t waste any of your valuable time on Bulletstorm’s gameplay or backstory (partially because I haven’t been able to bring myself to play it); but let’s dive straight into the controversy: While most crime sims simply allow children to perform terrible acts of violence, Bulletstorm actually goes out of its way to reward your child for coming up with creative ways to torture and molest his enemies.

This functionality comes courtesy of a new invention, never before seen in a videogame: A Kill Achievement System. Simply put, while playing Bulletstorm, children will “unlock” Kill Achievements (referred to in-game as “Money Shots”) by completing various types of “kills” within the game world. When one of these special kills is completed, a message pops up on-screen praising the player for his or her brutality, increasing their high score, and rewarding them with money which can be used to purchase more advanced weapons and armor.

Here are just a few of the thousands (if not millions) of “Kill Achievements” included in the game. Please note that many of these are extremely graphic, offensive, or even racist, so please ensure there are no pregnant women or unborn children in the room if you intend to read this passage aloud.

Once again, I must sincerely apologize for the atrociousness of the above content, but I could see no more effective way of conveying the outrageous depravity of this game and its developers. It comes as no surprise that those who created this game are from Poland, a socialist police state where unwed child prostitutes perform sexual favors (suck-its, jerks-ems, burlap turnovers, etc) for tourists before popping in to the state-run hospital for a free abortion, medical marijuana, and a welfare cheque.

Sound familiar, Americans? It should, as this is the way our country is currently heading unless we straighten up and stop engaging in reality television and premarital hand sex. I don’t know about you, but the only hands I want rubbed all over my body are the healing hands of Christ.

While the “Money Shot” system is practically oozing with sin, it is most certainly not the only sinful portion of Bulletstorm. Since the remaining sinful acts depicted in the game are too numerous to list, I’ve decided to inform you of only the most egregious ones. They have been divided into seven categories (each of which corresponds to one of the Seven Deadly Sins) to make them easier to understand. 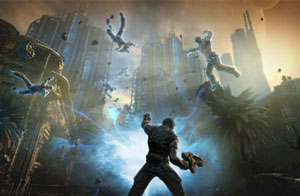 Trickery is defined in The Bible as “any act which is meant to mislead, fool, or bamboozle a man”. Trickery is considered a sin because acts of deception are inherently Satanic and thus should not ever be performed under any circumstances. Examples of trickery include lying, cheating on a spouse, forgery, incest, false advertising, begging, card tricks, theft, and bribing. Unbelievable though it may be, Bulletstorm contains hundreds of examples of each and every one of these acts. 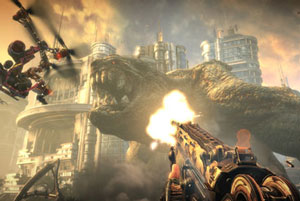 I would hazard a guess that within the first twenty minutes of Bulletstorm, children will be subjected to more expletives than they would hear watching an entire season of a broadcast television show. In the short preview I watched, every other sentence out of the main character’s mouth was chock-full of obscenities. “F**k you!” “I’m gonna eat this s**t!” “F**k their heads apart!”, “Kill the b**ch holes!”, “Drink a** from a c**t!”, “I’m here to chew some gum and I’m all out of gum so let’s suck some c**k”. Parents, consider yourselves warned.

“Thou Shalt Not Kill.” Do you know who said that? If you said “God”, you answered correctly. We are never to kill another living soul on this earth. Ever. Committing acts of murder, death, and maimery are strictly forbidden by The Bible. And here’s a newsflash for all you gamers out there: Virtual worlds are not exempt from God’s Law. Lest you forget: The Lord holds domain over all things, and I’m sorry to inform you that “All Things” does, in fact, includes videogames. In Jesus’s eyes, firing a quadruple-barreled shotgun into the face of a toddler and sending her careening onto the third rail of a subway track where her tiny body crackles and sparks is a sin whether it is done in the “real” world, or a virtual one.

Failure To Observe The Sabbath 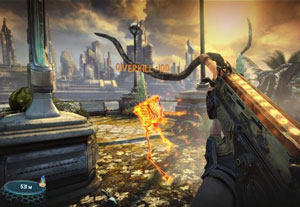 Not a single character in Bulletstorm even makes mention of the Sabbath or takes steps to observe it as a holy day of rest. This is Bulletstorm’s most direct affront to law of our Lord, and ironically it may also be their undoing. Since this particular sin is a Venial sin, the game’s creators will be unable to apologize to God through fasting, confession, or prayer. But their loss is Christianity’s gain. For soon these men will stand before The Creator, and I have little doubt that he shall sentence them to burn thoroughly in the foulest pits of hell for their actions.

So brighten up: When this day comes (and believe me, it will come) God will part the clouds of heaven, allowing true Christians like you and I to peer down and watch with delight as the flesh is flayed from the bones of these truly evil souls. Amen.

The Bible takes a very clear stand against racism. Moses himself in the Old Testament explains as much when he is speaking to the lepers: “Take no slaves, and treat man as if he were a king unto himself.”

Bulletstorm makes no mention of these words. Your subordinate throughout the game is an afro-american (black) character. Normally I would commend a developer for taking such a bold step towards equality by including various races in their game, but when the only black character constantly displays blatantly stereotypical “black” traits such as shouting, athletics, gun use, aggression, and violence…I feel this crosses the line in a big way.

To make things even worse, the main character uses a whip as a weapon. One can only imagine the sick power-trip jollies that White Pride fanatics will get from playing this game. It truly is disgusting.

I don’t know any Black or African individuals, but I’d bet my hymnal that groups like the NAACP are going to be pretty furious when they see the hateful way our brown-skinned brothers are portrayed in this game.

Let’s stop the hate, get our heads out of the game, and start reading The Bible, people. 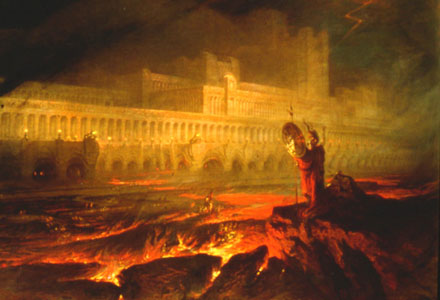 Never before in my career as a Christian Game Journalist have I come across a game which is so utterly depraved. I do not feel I am exaggerating in the least when I say that The Dark Prince himself must be beaming with pride at Bulletstorm’s success.