Whether you believe it in or not, there’s really no denying that The Bible contains some of the most amusingly vulgar material ever committed to paper.

And while I’ve probably already covered “The Worst Of The Worst” (e.g. gang rape, unholy semen spillage, father-daughter incest, etc) in Part 1 Of My Biblical Filth Series, there are still a couple more–let’s call them “tawdry”–passages I’d like to share with people who might not have actually read The Bible.

So here are five more crude and/or offensive Bible stories you may not have heard of.

1. THE KING WITH A FORESKIN FETISH 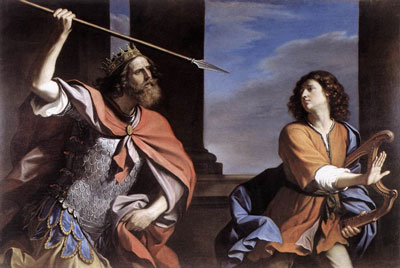 Old King Saul has a daughter he’s been trying to marry off for years. One day a potential suitor (David) comes along and requests the daughter’s hand. The king isn’t too hot on David (for whatever reason) so he gives the marriage his blessing under one condition: David is to collect “100 foreskins” from 100 Philistines (who I guess were enemies of the king). Seems reasonable enough right? So here’s how it went down:

24 When Saul’s servants told him what David had said, 25 Saul replied, “Say to David, ‘The king wants no other price for the bride than a hundred Philistine foreskins, to take revenge on his enemies.’” Saul’s plan was to have David fall by the hands of the Philistines.

26 When the attendants told David these things, he was pleased to become the king’s son-in-law. So before the allotted time elapsed, 27 David took his men with him and went out and killed two hundred Philistines and brought back their foreskins. They counted out the full number to the king so that David might become the king’s son-in-law. Then Saul gave him his daughter Michal in marriage.

Those who go above and beyond the call of duty will be amply rewarded. If a crazed monarch who hates your guts asks you to murder 100 men, casually circumcise them, and heap their bloodied foreskins at his feet, don’t be lazy about it: Get him 200 foreskins. Trust me, it’ll impress him so much he probably won’t even try to have you killed in your sleep after you’ve married his daughter.

What’s that you say? Saul actually did try to have David killed in his sleep? Alright then. Maybe he should’ve gotten 300 foreskins and thrown in a few scrotums to sweeten the deal, but who knows if Saul would’ve even cared.

You just can’t please some people.

2. GAY SEX IS PUNISHABLE BY DEATH, AS IS PRETTY MUCH EVERYTHING ELSE 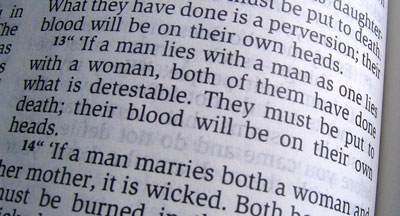 God is pretty clear on where He stands when it comes to homosexuality*: If you’re gay, you had better learn to suppress your impulses, otherwise…you must die. Nowhere in The Bible is this spelled out more clearly than in Leviticus 20-13:

13 “‘If a man has sexual relations with a man as one does with a woman, both of them have done what is detestable. They are to be put to death; their blood will be on their own heads.

Kind of hard to misinterpret God’s message here, although I’m sure many kindhearted, non-gay-wishing-to-kill Christians have tried. But it doesn’t stop there. “Being Gay” is just one of the many, many, many instances in which God has attached an overly severe penalty to a seemingly minor infraction. Here are a few of the other offenses which God says should be punishable by death (or exile):

Now at this point, many of you may find yourselves asking: “Why does my cow have to be killed because some guy had sex with it?”, “Should swearing at your parents really carry the same sentence as murder?”  “Where’s the fun in marrying my own sister if I can’t even have sex with her?” etc, and if so, I think you’re missing the point. You don’t follow these rules because they make logical sense, you follow them because The Bible says so. End of story.

“Do what I say, or die.” Lest you forget, The Bible is the infallible word of God, so if you’ve got a problem stoning some old woman to death due to the fact that she keeps a pack of tarot cards in her desk drawer at work, you can take it up with Him.

3. A WHORE LUSTS AFTER MEN WITH LARGE, DONKEYLIKE GENITALS AND HORSELIKE EJACULATIONS 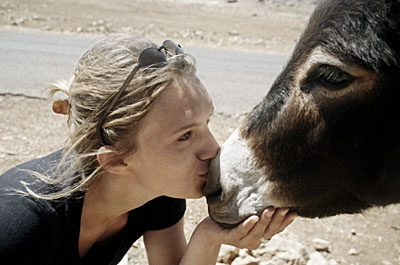 I’m fairly certain this is another one of The Bible’s cautionary tales (as in: “here is the story of a sinful person” rather than “this is how God says you should act”), nevertheless, it is still extremely graphic, and I remain somewhat puzzled as to why God found it necessary to include it:

17 Then the Babylonians came to her, to the bed of love, and in their lust they defiled her. After she had been defiled by them, she turned away from them in disgust. 18 When she carried on her prostitution openly and exposed her naked body, I turned away from her in disgust, just as I had turned away from her sister. 19 Yet she became more and more promiscuous as she recalled the days of her youth, when she was a prostitute in Egypt. 20 There she lusted after her lovers, whose genitals were like those of donkeys and whose emission was like that of horses. 21 So you longed for the lewdness of your youth, when in Egypt your bosom was caressed and your young breasts fondled.

Come on, isn’t it obvious? There was once a whore who relished the company of large, breast-fondling Egyptian men with inhumanly large members from which thick, unending geysers of sperm would issue.

So hallelujah, I guess.

4. JESUS THREATENS TO KILL SOME CHILDREN 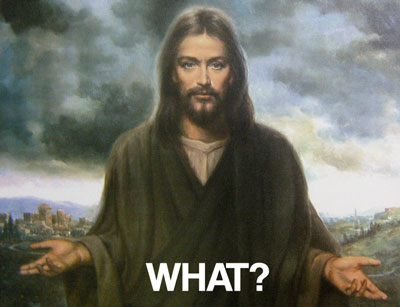 If I were claim that The Bible showed Jesus to be a “tightly wound ball of heavenly rage who constantly threatened to murder innocent children” it would probably be pretty offensive. But obviously, I would never say such a thing, partially because I don’t feel like receiving death threats from various insane sects of Christianity, and partially because it isn’t exactly “true”.

No, according to The Bible, Jesus only threatened to murder innocent children once (at least as far as I know), so it’d definitely be unfair of me to characterize him as a constant childmurderthreatener when in actuality, he only dabbled in this area. Here’s what Jesus had to say about Jezebel (a woman who pissed off God by telling her people to worship someone other than him):

21 I have given her time to repent of her immorality, but she is unwilling. 22 So I will cast her on a bed of suffering, and I will make those who commit adultery with her suffer intensely, unless they repent of her ways. 23 I will strike her children dead. Then all the churches will know that I am he who searches hearts and minds, and I will repay each of you according to your deeds.

Whoa, Jesus, no offense, but I think maybe you need to slow down and take a couple of deep breaths here. OK, sure, the woman led a bunch of people to worship a false god and you want to punish her. I got no problems with that. Fair is fair. Go ahead and bring terrible suffering upon her for all eternity if it makes you feel like a big man, but I do have to question if the murder of her children (who were in no way involved in any of this) is completely necessary, let alone justified.

Not that I’d risk incurring the divine (and apparently easily incurred) wrath of the Son Of God by questioning His understanding of crime and punishment or anything…it was just a thought.

The answer to the oft asked rhetorical question “What Would Jesus Do?” is apparently “Kill Some Kids”. At least when it comes to punishing those who choose to worship false (read: non-Christian) gods.

Christian 1: “I am filled with an impotent rage. There is a Buddhist priest in my town and he is causing his followers to worship a false god! I will destroy him!”

Christian 2: “Now now, let us not be too hasty. Let us ask ourselves ‘What would Jesus do in this situation’ and we shall go from there.”

Christian 1: “Your point is well taken. I too am familiar with Christ’s views on the Harlot Jezebel, let us now go and torture this Buddhist, bludgeon his small children with cudgels until they are dead, and then throw him out a window so that he may be devoured by dogs.”

Christian 2: “Agreed. We shall gather our fellow parishioners are destroy this man with Christ’s love in our hearts.”

5. CHILDREN ARE TORN APART BY BEARS FOR MAKING FUN OF BALD MAN 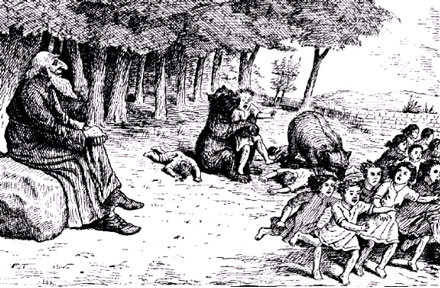 Those who have done even the slightest bit of research on the most insane parts of The Bible will almost certainly be familiar with this story from 2nd Kings. But for those who haven’t heard of it, here’s the passage:

23 From there Elisha went up to Bethel. As he was walking along the road, some boys came out of the town and jeered at him. “Get out of here, baldy!” they said. “Get out of here, baldy!” 24 He turned around, looked at them and called down a curse on them in the name of the LORD. Then two bears came out of the woods and mauled forty-two of the boys. 25 And he went on to Mount Carmel and from there returned to Samaria.

Let me just make sure I’ve got this straight: A guy named Elisha was walking up a mountain when a huge throng (42 or more?!) of inexplicably disgruntled children came out of a nearby town and began shouting unimaginative bald jokes at him. The man responded (as any reasonable adult would do) by cursing them in God’s name. Upon hearing this curse, God (in his infinite wisdom) decided to conjure some bears out of the forest to maul most of the children to death?

You can’t just go around making bald jokes without expecting divine retribution in the form of two holy bears who will emerge from the forest and tear you apart even if you’re just a child who probably didn’t know any better.