There’s something about crossing the border from Minnesota into Wisconsin which has always unsettled me. The feeling would probably best characterized as crushing despair tinged with an oppressive pastoral loneliness. It isn’t necessarily that the scenery itself is different, it’s more of a vague feeling…as if the sadness of its residents has somehow seeped into the soil and air, poisoning it, like fallout from a nuclear blast. Or perhaps more appropriately, like the solvent vapors from innumerable batches of high-grade bathtub methamphetamine.

So it should be obvious that I’m not particularly keen on the idea of visiting Wisconsin for fun and diversion, which makes me just the person to write an overtly antagonistic and mostly-inaccurate guide of it for nonexistent tourists. 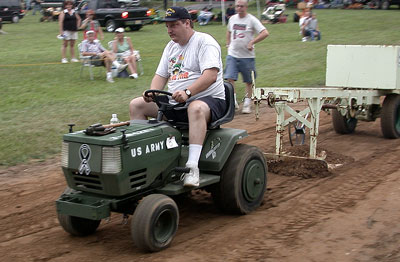 People who’ve never been to a tractor pull tend to dismiss them as “just a bunch of drunken corn-shucking crackers lounging around in the bleachers with their belts unbuckled while tractors and obnoxious trucks drag various objects back and forth through the mud in front of them.” Having been a Wisconsin tractor pull myself, I can honestly say that they have substantially more to offer than this.

For example, at the pull I attended, there were loudspeakers throughout the grounds which blared pop-country songs and farm animals in farm animal pens. So yes: There is certainly more going on here than object-draggery (even if this is sort of the main event).

But perhaps I’m being unfair. Events like tractor pulls and county fairs are likely essential to the functioning of predominately rural states like Wisconsin. Without the release provided by such diversions, the bodies of Wisconsin’s residents–no longer able to repress the bestial impulses conveyed to them by their corrupted amygdalae–would almost certainly begin to undergo a rapid process of “devolution”, and Wisconsin would quickly become just another federation of destitute, undereducated hissing lizard men in pajama pants who drive comically large trucks and lie splayed out upon sun-warmed boulders bickering endlessly about the achievements of various quarterbacks. 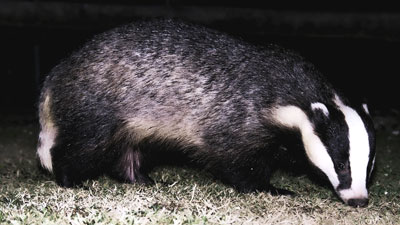 The Official State Animal of Wisconsin is the Badger. It might not seem like it makes too much sense at first (is Wisconsin really known for its badgers?), but there’s definitely a reason for it. I’ll give Wisconsin’s resident’s credit for one thing, they sure know how to pick an appropriate State Animal. Observe:

Badgers: Short-legged, heavy-set omnivores covered in thick hair who are often solitary, but can sometimes be seen hunting together in a cooperative fashion.

Residents of Wisconsin: Short-legged, heavy-set omnivores covered in thick hair who are often solitary, but can sometimes be seen hunting together in a cooperative fashion.

The only thing in the world duller than watching football is reading about football. In most cases, I simply lapse into a deep, dreamless sleep before even making it through the introductory paragraph. So before attempting to read the Wikipedia entry on the Packers (for the purposes of this article), I decided to wash down three hits of reasonably strong acid with 50 grams of amphetamines which I had dissolved in a large tumbler of caffeinated absinthe and an ancient can of OK Soda I found in a neighbor’s crawlspace.

My thinking was that this would keep me alert long enough to make it at least halfway down the page, but unfortunately, I was only able to make it to the third sentence (“The Packers are the last vestige of ‘small town teams’ that were once common in the NFL during the 1920s and 1930s”) before what appeared to be a pack of small children with the faces of hawks began snarling and leaping in through my bedroom window. The shock of this caused me to topple backwards out of my chair and onto the floor, where I was overcome by a number of terrifying superbowl-themed hallucinations accompanied by what I believe to have been multiple grand mal seizures.

Upon awakening twenty-eight hours later, I found myself to be nude. The carpeting of my room was soaked clean through with a mixture of what I later learned to be Coors Light, excrement, and vomit. Stumbling down the hallway I noticed a foot protruding into the hall from the bathroom. Even before I rounded the corner I knew it was her…Carol. She lay on her side in a pool of blood, her left arm wrenched from the socket. Her face was an unrecognizable goulash of flesh and broken teeth. I looked down at my hands, noting the bruises on the knuckles. Flashes of the night before…the flicker of a cheap big screen television…two beers in each hand…Cheetos dust filling the air. Never. Never. It couldn’t be…

And then, pulling up her shirt, I saw it there, ripped into the stomach in jagged crimson: “They Lost.”

My head began to swirl and I stumbled backwards over the rim of the tub, my head cracking into the cold tile wall. The room around me explodes into a kaleidoscope of yellow and green and I feel consciousness slipping away.

As of 2019, Wisconsin is currently ranked in the top 5 on the Most Sex Offenders Per Capita  List. Sure, it might not be number 1 but a strong placing in the top 5 shows is that the groping and fondling trade is flourishing.

If there’s one thing Wisconsin is known for, it’s creating a nurturing environment from which fantastic, creative bands can emerge. Just look at their history: The Violent Femmes? I mean come on! That’s a band that some people are aware of the existence of, right?

And then theres…uh…Garbage. They’re a band I guess. Uh…hey, well Norwegian violinist Ole Bull was MARRIED in Wisconsin in the 1800s, and I assume he lived there for a while, so that’s something. And I mean, you’ve got the entire Jazz scene and that’s like a highly respected ART form and everyth–hey wait where are you going?! Come back! I have more!

How about the Reptile Palace Orchestra, the worldbeat band specializing in lounge, klezmer and other Eastern European music!? DJ Tony Neal? Streetz & Young Deuces? Killdozer? How about Killdozer!? They covered American Pie! Do you have any idea how long that song is? It’s like 80 minutes! NOT JUST ANYBODY CAN COVER AMERICAN PIE YOU KNOW! YOU CAN’T EVEN DENY THAT WISCONSIN IS A HOTBED OF MUSICAL CREATIVITY! 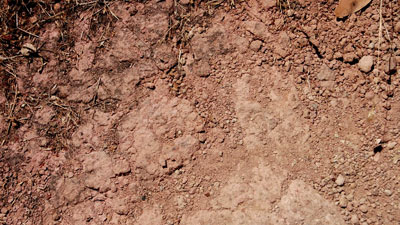 The Official State Soil is Antigo Silt Loam. What do you mean you’re not interested in that? I’ll have you know that soil can be fascinating! Take, for example, this account of the debate surrounding the official nomination and recognition of Antigo Silt Loam as Wisconsin’s state soil:

Critics such as the Greater Northern Montmorillonite-Smectite Consortium (GNMG) have long cried foul on the choice of Antigo Silt as State Soil, claiming that it is far too gritty and rough textured to even be considered for nomination. They propose that the sole reason a silt was even considered was due to heavy lobbying by organizations such as SLAG (The Silt Loam Advocacy Group) and CACCLS (Citizens Against Clay & Clay-Loam Soils).

The argument being that these groups in particular have long expressed vocal prejudice towards the governmental recognition of any soil type whose particle size rates at smaller than 2 μm (such as clays). As such, GNMG has asked that the choice of Antigo Silt be overturned as ethically invalid due to SLAG and CACCLS’s involvement in the nomination. Government officials are yet to respond.

Whew. Talk about exciting, right? This story’s got everything! Corruption, intrigue, good vs evil…everything! Go ahead and tell me that wasn’t one of the most interesting things you’ve ever read, I dare you.

Yeah that’s what I thought. Next time maybe you’ll keep your big mouth shut about the culture of soil, you ignorant son of a bitch!

Well, I hope you’ve all come to a better understanding of the true nature of Wisconsin: A place where a man would sooner slice open your jugular in the back of a small family owned grocery store and cut your body into pieces with the intent of using your skin to fashion a number of crude bowls after placing your head in a paper b–aww man, sorry, I’m doing the “Wisconsin is full of serial killers” thing again, aren’t I? I promised myself I wouldn’t resort to it, but it’s just so easy.

Alright, here. I’ll end with an excerpt from a famous poem (written by me) instead. It is entitled “Upon Fields Of Joy” and is dedicated to the great state of Wisconsin and all who reside there.

Boys run through the gutters
kicking at
Coors light cans
and cursing
under their breath.

One scoops up a cigarette butt
placing it to his lips
“I’m a man”
he says
scowling.

They get wasted in ravines
and fondle bored girls
in the backseats
of rusted out cars.

And soon:
small drab houses
with wives
and boys of their own
and bitter resentment
to dull with booze.

It isn’t much
but of course
There is little else
to do
in Wisconsin.