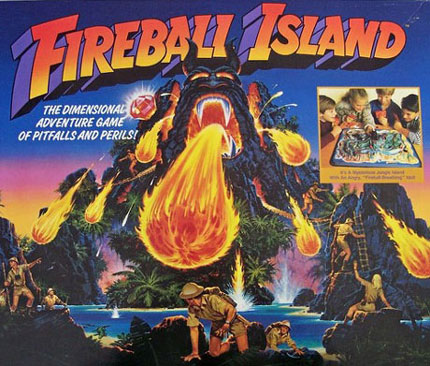 When it comes to toys, children have ridiculously low standards. A kid will play with anything. If you don't believe me, pick up any random object (a sheet of paper, a handful of broken glass, a bunch of loose change clumped together because someone spilled syrup or something in the cup holder) and hand it to a two-year-old. Chances are they'll begin playing with it, and good many of them will probably try to eat it too. That's how openminded kids are; when it comes to potential toys, everything gets a fair shake.

Alas, the same cannot be said of adults. As humans age, we develop "tastes" and the ability impose "value judgments" upon "objects" people "hand to us". For example: If you were to offer a full-grown woman a bucket filled with antifreeze and say "Drink this, it's antifreeze", she would almost certainly refuse. Not so with a child. In fact, a recent survey conducted by the Pew Research Center found that a full 100% of children surveyed happily drank antifreeze out of a bucket. So yeah...uh...kids...and..uhh...

Dammit, I blew it. This segue is the worst. There's no way I can make it work now. I guess I'll just have to start the article manually. Hold on a sec, let me find the thing here. Alright, got it. Let's see if this works.

WHAT IS FIREBALL ISLAND, AND WHY? 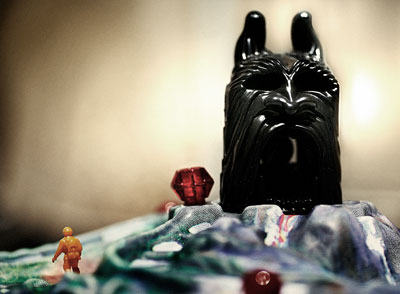 Fireball Island is a boardgame which was, at one point, released. What this means is that copies of it were printed at a factory and subsequently shipped to 2nd and 3rd parties who allowed customers to take the game home in exchange for currency.

Got it? Great. Now that I've covered the boring logistics out of the way I can get the to the exciting part: A description of the game itself. I'll begin by transcribing the text off the back of the box:

Welcome to the island of FIREBALL ISLAND. In FIREBALL ISLAND your goal is to steal a plastic JEWEL from the top of MOUNT FIREBALL. But beware: On FIREBALL ISLAND, fireballs REIGN SUPREME! To be clear, this is not meant LITERALLY but FIGURATIVELY! Fireballs hold dominion over FIREBALL ISLAND in a METAPHORICAL sense, in that FIREBALL ISLAND'S inhabitants live in FEAR of the FIREBALLS and as such are FORCED to adjust their LIFESTYLES and BEHAVIOR so as to AVOID getting INCINERATED. In THIS WAY, the FIREBALLS HOLD DOMINION over their lives! CERTAINLY I did not mean to imply that the FIREBALLS themselves were SENTIENT RULERS, as that would be ABSURD! In any event, I APOLOGIZE if I gave any of you BRAVE TREASURE HUNTERS the wrong IMPRESSION!

Exciting as this description is, it doesn't really do a good job of telling potential players what playing Fireball Island is actually like. It would've been far more honest if they had put something like this:

If your idea of a good time is paying several hundred dollars for what is essentially 45 minutes of dice-rolling punctuated by occasionally being allowed to roll a marble down a small plastic mountain, then by all means, pick up Fireball Island, you weirdo.

ALRIGHT SO WHAT'S IN THE BOX? I'M SUPER INTERESTED IN OVERVIEWS OF THE VARIOUS PARTS INCLUDED IN OLD BOARD GAMES. WHAT A THRILL. 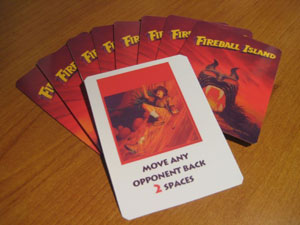 Well, there are game tokens, a couple marbles, some bridges, and of course: ACTION CARDS. These are cards with various actions on them. Various dull actions. I'd estimate that (artwork aside) the game's designers spent about six minutes working on these cards. Absolute garbage.

Bo-ring! It's pretty obvious the cards were an afterthought. I really don't think it would've have taken them long to come up with something more interesting. I mean, the outcome of the game is almost completely random as it is, so there's obviously no need to be concerned about balance. Why not just make the cards totally nuts?

WHAT ARE THE PLAYER TOKENS LIKE? IS ONE OF THEM A SHOE? IN MONOPOLY I ALWAYS BE THE SHOE. 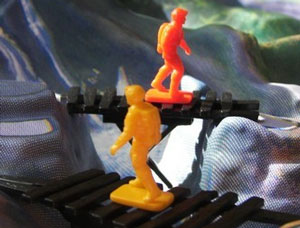 No, there aren't any shoes. Why would there be a shoe? If you're looking for some kind of mindblowing "anthropomorphic articles of clothing with just enough sentience that they feel like climbing mountains I guess" game, you're in for some disappointment here . In Fireball Island you get a bunch of boring pastel guys in pith helmets. All of them are men too, presumably because it was thought that no woman would be stupid enough to risk her life on an expedition to retrieve a shitty plastic jewel from a remote (and clearly cursed) tropical island renowned for its active volcanoes, absurdly rickety bridges, and house-sized flaming boulders.

Well, either that, or Fireball Island is sorta sexist. But I think I'll give it the benefit-of-the-doubt since it comes from Hasbro, the always-inclusive, extremely progressive company behind products such as Girl Talk (AKA "Hey Girls Let's Gossip About Boys On The Pink Phone "), Mall Madness ("Hey Girls, Let's Go Shopping Because If There's One Thing All Females Love It's Simulating The Mindless Consumption Of Consumer Goods!"), and Mystery Date ("Hey Girls, Let's Drool Over Cute Guys And Fantasize About The Day One Of Them Will Ask Us To Marry Him And Give Our Silly Little Lives Purpose & Meaning. P.S. Also All You Non-Heterosexual Girls Can Go Play By Yourselves And Feel Even More Alienated And Alone Because Mystery Date Is Straights Only!")

WHAT IS WRONG WITH YOU? I MEAN JESUS CHRIST, LOOK AT THE SENTENCE YOU JUST WROTE. IT'S ABOUT 8,000 WORDS LONG AND IMPOSSIBLE TO UNDERSTAND. I DIDN'T COME HERE TO READ THE BORDERLINE-INCOMPREHENSIBLE RAVINGS OF A  LUNATIC. I CAME HERE TO READ ABOUT FIREBALL ISLAND!

Alright, alright, fine. I'll get back to Fireball Island, but I really only have one thing left. It's a small flowchart I made to help guide potential purchasers of Fireball Island. Sort of a public service. I just need you to ask me about it so I can post it in my response.

BUT I DON'T CARE ABOUT YOUR STUPID CHART. WHY WOULD I? IT'S PRETTY OBVIOUS YOU DON'T EVEN HAVE ANYTHING INTERESTING TO SAY ABOUT FIREBALL ISLAND. YOU'RE JUST SCREWING AROUND. AND WASTING EVERYONE'S TIME.

Thanks for asking! I'd be more than happy to show you a Fireball Island buyer's guide in flowchart form to wrap-up this article! Here you go: 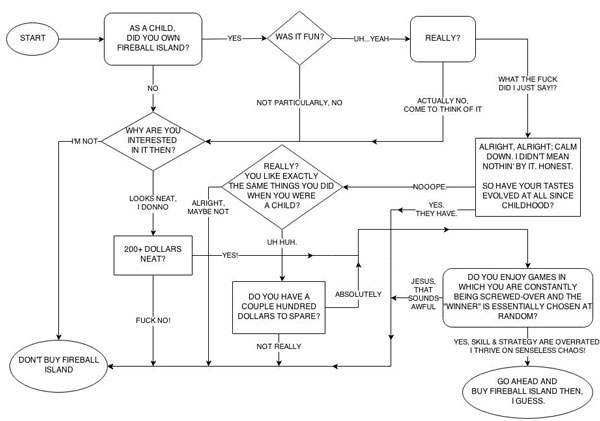