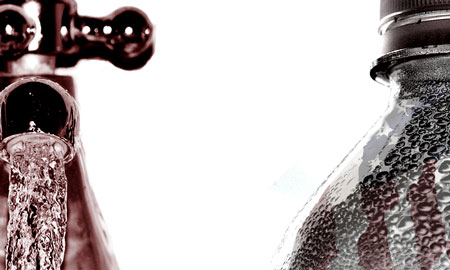 The more observant among you may have noticed that there has been a fairly extreme smear campaign launched against bottled water by Big Government and the leftist newsmedia of late. This comes as no surprise, as the ability to purchase and casually discard nonbiodegradable plastic receptacles is one of the few personal freedoms which remain available to us in this increasingly socialistic world of ours.

Which is precisely why it is imperative that people realize that claims such as "bottled water creates unnecessary waste", "bottled water is less safe than tap water", or "most bottled water is just tap water that costs 600% more" are nothing more than lies perpetuated by politically correct, freedom-hating rabblerousers.

So with that in mind, please have a look at five of the many reasons why it is your civic duty to consume bottled water over tap water.

Strict FDA regulations disallow the presence of E. coli or fecal coliform bacteria (which would indicate the presence of fecal matter) in city tap water. Their requirements for BOTTLED water, on the other hand, specifically allow for “certain amounts” of fecal matter to be present. So buy bottled water and score one for consumer choice! We don't need big government butting their noses in and telling us what "is and isn't allowed to cause Dysentery, Typhoid Fever, and Hepatitis A" in our drinking water. The last time I checked this was America: Land of the free, home of the free.

The ability to drink water laced with the fecal matter of others is one of the inalienable rights upon which this country was built, and I'll be goddamned if I'm going to allow the fuddy duddy college-boy quacks at the FDA to take that right away from me.

A purchase of bottled water is a vote for freedom, and a blow in the fight against tyranny!

2. YOU CAN’T LITTER WITH TAP WATER 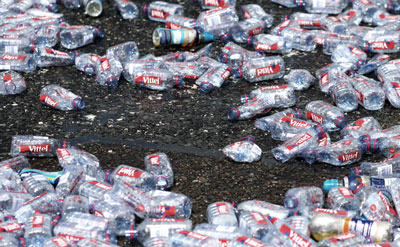 It’s a well-known fact that littering is fun. Unfortunately it is now a "crime" due to the liberals in congress and the media. Isn't it just like Big Government to tell us what we can and can't do for fun? Here's a newsflash: Littering is not nearly as bad for the environment as the fetus butchers would have you believe. It can even be beneficial. For example: Did you know that plastic water bottles are manufactured using oil? This means that the components in discarded bottles will eventually "break down", returning to their natural state (crude oil). This oil then seeps into the local streams ground water where it can be harvested and used to run our automobiles, boomboxes, and lamps.

Tap water, however, confers none of these benefits. In fact, if one wished to litter using tap water, they would have to pilot a motorcar to the store in order to purchase the plastic bottles with their own money, drive home, fill them at the tap, drink the water, and then take another drive so they could roll their window down and toss the bottle out. Just look at all the natural resources which were wasted during this process!

So don't even THINK about dropping those soiled plastic food packages, water bottles, and discarded methadone prescription containers into the clearly labeled recycling bins at your home. Instead, simply place them in a garbage sack and heave them into some wetlands, a schoolyard, or a stream, safe in the knowledge that one day, the precious oil within them will be freed and harvested in the name of progress and liberty.

Bottled water has been called "the most ingenious marketing concept of the 20th century", and with good reason! There's nothing easier and more convenient than buying bottled water from a store. I mean just think of it: To get water from a tap you'd have to walk into the kitchen and then go through that whole ritual of finding a glass, turning on a tap, and then putting the glass under the water until it was full. And don't even get me STARTED on the hassle you'd have to go through if you wanted to carry tap water AROUND with you. Buying an inexpensive reusable container and refilling it? What is this, 16th century Holland all of a sudden?

Is Desiderius Erasmus Roterodamus, wandering around filling up his water bucket at the town well and then proceeding to pen the oft-repeated quotation "In the land of the blind, the one-eyed man is king?" while enjoying a mouthful of his tasty hand-drawn well water? Well I hate to break it to you Dessie Baby, but here in modern times we don't get our water from wells or rivers or spigots, we buy it from STORES. So why don't you just take your cyclopean ass back to Rotterdam and leave the water procurement to the two-eyed professionals in the 21st century, you monastic piece of shit!

4. TAP WATER IS FAR TOO CHEAP

FACT: Things that don’t cost a lot of money are low quality. Tap water usually costs LESS THAN A CENT per gallon, while a 20 ounce $1 bottle of water works out to something like $6.40 per gallon. That's more than twice as expensive as the current price of gasoline! Pretty prestigious if you ask me.

So let's get reasonable here: You're telling me that the water that comes out of the tap in the homes of POOR PEOPLE is of a higher quality than this 640% more expensive bottle of water I bought at whole foods? Don't make me laugh. In case you haven't noticed, this bottle has a photograph of a mountain stream on it. Haven't you ever seen that movie Heidi? The girl was crippled, and they sent her off into the mountains to live with that beard guy and sure enough...the mountains cured her crippleness. 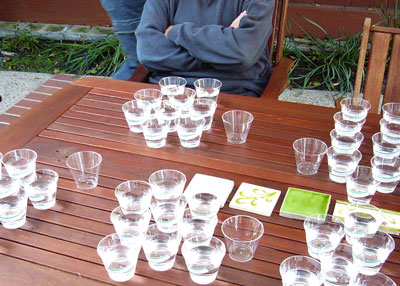 Bottled water is an organic gift. It is provided to us as a public service by friendly and caring corporations who pride value, safety, purity, and freedom over all things. Tap water, on the other hand, is the product of communism, and as such is only slightly more tasty than the pus excreted during a urinary tract infection. You can talk however much jive you want about your Placebo Effects  and your innumerable studies and taste tests which strongly suggest that most people cannot distinguish between bottled water and tap water or even that twenty to forty percent of bottled waters likely come from municipal sources anyway, but I'm not about to listen to you.

Because I trust my mouth and my gut to know that bottled water tastes better than tap. So yeah, I'll definitely take an Aquafina (bottled locally using municipal water) a Dasani (bottled from local, municipal sources) any day of the week over your filthy polluted socialist tap water.