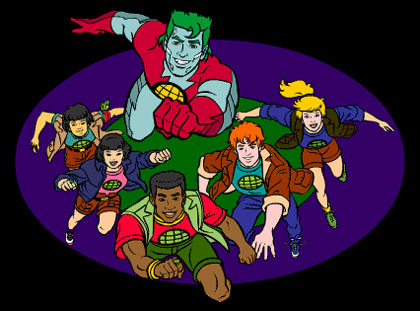 When it comes to indescribably lame environmental superheroes, there few lamer than Captain Planet. Admittedly, this is mostly due to the fact that I can't think of any other environmental superheroes and can't be bothered to do any research, but it's also because he's a scantily-clad man with a green mullet whose only friends are the harem of children who dress like him and all wear matching jewelry which he himself has provided. Nothing strange about that, right?

Some might point-out that writing an article ridiculing Captain Planet is "the author of such an article kind of "dumb" and "obvious", and that "the author of such an article is really just picking low-hanging comedy fruit". But I would respond by ignoring those points and saying that one of the things I appreciate most about Captain Planet is the ease with which he can ridiculed. A person doesn't really even need to actively "make fun" of him, because simply listing various facts about him is enough to send most people into fits of derisive laughter. The character is clumsy earnestness made manifest, and I think that deserves some recognition. 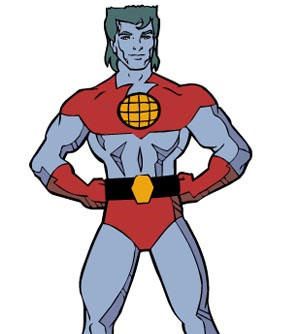 Seriously. Take a long, hard look. We're meant to believe that this is the form an ageless, indescribably powerful extradimensional being has chosen to take. Chosen! According to the shows lore, he actively chose to look this way. On purpose.

Yes, out of every possible manner in which he could have assembled his atoms, he made the decision to appear to humanity as a sparkling powder-blue interpretive dancer sporting what appears to be torn up remnants of a skintight baby tee with a clipart globe on it, oversize red briefs, and a dirty green flat top mullet.

But then again, they do say fashion is cyclical. Maybe in ten or twenty years, the "aggressively-flamboyant molesty hillbilly mannequin slash early 80s punk rocker who continues to wear terrifying spandex clothes he has long since outgrown" look might make a comeback. 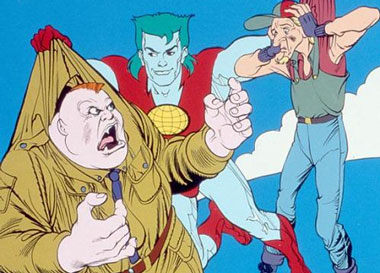 I realize that bad puns are not at all uncommon in children's superhero cartoons, but I feel that this does little to excuse Mr. Planet's near constant usage of worst puns imaginable. To give you an idea of the razor-sharp wit possessed by the show's writers, here are the sorts of "jokes" a typical Captain Planet viewer would be subjected to throughout a typical episode:

If puns like these aren't enough to make you want to carve off your own face with a rusty civil war era bayonet...well then I suppose should I tip my hat to you for even being able to read this sentence, because you obviously suffer from severe brain damage.

3. HIS ONE WEAKNESS IS POLLUTANTS 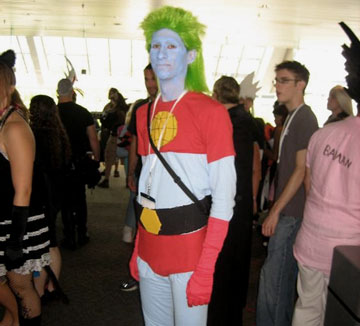 Almost every superhero has a weakness: Superman has kryptonite, spider-man has the infuriating inability to separate his work and personal life, and The Fantastic Four have society's continued unwillingness to give a shit about their garbage story. Captain Planet's weakness is pollution, a category so broad so as to be essentially meaningless.

Is it the physical pollution itself which harms him, or is the mere idea of pollution enough to bring him to his knees? Would he be injured by the concept of soil erosion? An overabundance of sulfur dioxide in the atmosphere? Could you kill him by throwing him into a lake which contained several broken-apart pieces of styrofoam that blew out of a guy's boat? Who knows? But also, who cares? Certainly not me.

4. HIS NAME IS "CAPTAIN PLANET" 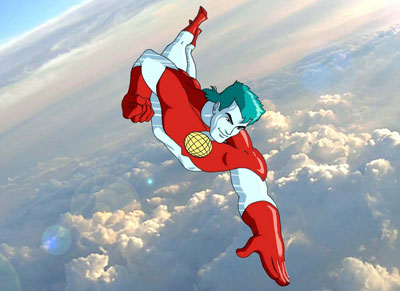 I mean come on, it's like they didn't even try. I have little to no experience in the field of Environmental Superhero Naming, and I know for a fact that I could come up with 10 cooler names than "Captain Planet" without even breaking a sweat. Watch and learn, envirosuckers:

And those were just off the top of my head. I'm sure I could come up with some even better ones, given enough time, but I think I've proven my point.

5. HIS TEAM OF "PLANETEERS" IS EVEN MORE WORTHLESS THAN HE IS

In the official Captain Planet lore, it is told that Gaia (the ancient spirit guardian of the earth, obviously) summoned The Planeteers to "protect the earth from pollution". Together with their magic rings (each of which can control one "element of nature"), this insufferably spunky group of ethnically-diverse idiots aimlessly wanders the globe in the hopes of catching sneering, unattractive bald men in the act of dumping green sludge into bodies of water.

These kids can each control one of the elements (of which there are apparently five). 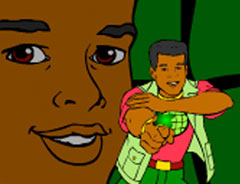 Kwame uses the power of his earth ring to make rocks move, levitate clumps of dirt, and even cause earthquakes powerful enough to make bad guys stumble around a little and go "whoooaaa!" or knock small, unsecured possessions off of shelves and onto the floor. 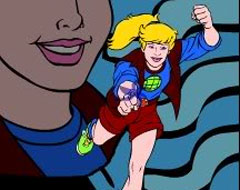 I'm sure Linka is probably supposed to be Russian or something, but who knows. Her ring grants her the power of wind, which I assume would be quite useful if all you wished to do was mildly annoy your enemy by mussing their hair, blowing sand over a paleontological dig they're undertaking, or whisking an important document out of their hand. 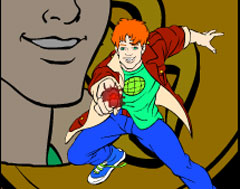 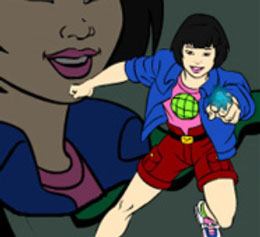 Like many Asian women, Gi possesses the power to control the element of water. What does she do with this power? Facilitate drownings? Rip all the water from a person's cells causing them to crumble into a pile of dust? No. But sometimes if a bad guy is holding a weapon she squirts them with a stream of water, causing them to probably drop it if they aren't holding on very tight. So there's that. 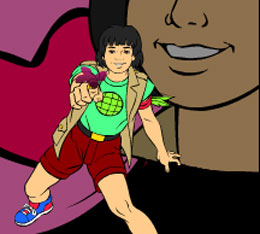 This young boy hails from the Amazon rainforest. He was raised by a shaman, which means he knows a lot about how if you get a cut you can put some chewed-up tree bark on it. His ring grants him the power of "Heart", one of the lesser known (read: nonexistent) elements. This means he is able to "instill caring, passion, and sympathy, and communicate with animals telepathically." Luckily the kid is pretty stupid, so he doesn't realize he got screwed over with the shittiest power.

So that's Captain Planet's team of crack assistants. If the existence of these guys doesn't get professional litterers shaking in their boots, I'm not sure anything would.

This is your theme song?! Fuck you!

7. HE SQUANDERS HIS AMAZING SUPERPOWERS 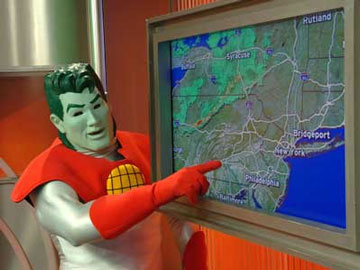 Looking at the list of superpowers Captain Planet possesses (Flight, Elemental Control, Near Invincibility, Super Strength, Telepathy), one would assume that Captain Planet would be one of the most effective superheroes of all time. This is most certainly not the case. If you ask me, the guy seems to have some serious resource allocation issues when it comes to crimefighting.

Being ultrapowerful and almost indestructible is all well and good, but if you continuously squander your unfathomable power on trivial actions (like, oh...I don't know protecting a group of endangered owls from poachers) instead of saving human lives, you're a pretty garbage superhero.

Here, take a look at this multiple choice quiz I mocked up. If you had Captain Planet's powers, which of these would you be more likely to use them for?

B. Shooting ice beams at the feet of guys who covered a group of puffins in petroleum; tying up loggers who failed to renew their logging permits with the Department of Environmental Conservation by flying around them really fast in a circle while holding a rope; swooping out of the sky to scold small children who casually litter in public parks.

If you picked A, you are probably a rational human who values life. If you picked B, congratulations: You're as big of an asshole as Captain Planet. 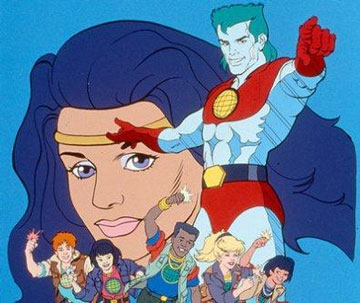 Although I realize this isn't a review, I still feel compelled summarize by scoring Captain Planet in a number of key superhero areas.