I’ve never quite understood people who claim to get “bored”. If you’ve got even a little bit of money, there’s no end to all the pointless crap you can buy to entertain yourself, and even the working poor should seemingly be kept busy (and so be saved from boredom) by their constant struggle to survive coupled with the relatively inexpensive escape provided by to them the abuse of alcohol.

But, for those who still claim to “have nothing to do” I will provide this list which may or may not contain six suggestions of highly original and universally pleasurable time-killing activities I may possibly enjoy the idea of participating in from time to time.

1. FAIL TO GRASP THE IMPERIAL MEASUREMENT SYSTEM EVEN AFTER ALL THESE YEARS

How many ounces in a pound? Eight? Forty six? A Billion? Who knows?! That’s the problem with the imperial system of measurement: The only people who can remember all the seemingly random units and conversion tables are science teachers and idiot savants. Why any country would continue to use an antiquated, obtuse, and borderline worthless measurement system when far more logical systems are available is beyond me.

Seriously, the only conversion I can consistently remember is 5280 feet in a mile. Can’t say it’s done me any good. It’s worthless. When’s the last time you measured out a mile? That’s right: Never. You never did. So why not, then, convert to the metric system? At least then you’d be able to remember the measurement system you were failing to utilize. I always loved the metric system when I was a kid. How many meters in a kilometer? Boom: 1000. How many kilograms in a gram? 0.001 of course.

But maybe my inability to use the imperial system just stems from my own faulty brain. Sometimes I even get money confused with time. Like, if I’m trying to count out a dollar I’ll get to 60 cents and think “Well, there’s a dollar”. You know, like 60 minutes in an hour? Usually whoever I was counting the money out to will say “You stupid shit. It’s 100 cents in a dollar.” and snatch the money out of my hands before shoving me into some off duty cop who accuses me of grabbing his ass, and maybe I did but hey: You can’t prove anything. Goddamn pig.

I think the point I’m trying to make here is: The Metric System.

As I have little idea what, precisely, the “pumping up” of “the jam” as described in Technotronic’s debut album (the aptly titled: Pump Up the Jam: The Album) entails, I can do little but theorize as to the actions one should take in order to ensure that the jam is sufficiently pumped:

Increase The Volume Of The Music

Once the volume on your audio equipment has been increased to the highest possible level, psychopharmacological stimulation is one of the only avenues available to those who wish to pump the jam even higher. Granted, you are only pumping up your PERCEPTION of the jam (as opposed to pumping up the jam itself) but in the end, this is only important on a philosophical level. The fact remains that even a small dose of cocaine or amphetamine is certain to bring about a significant increase in the levels of jam one experiences. But always remember to stay properly hydrated when partaking in either of these substances, as heat stroke is a very real danger.

Get Your Booty On The Floor (Tonight)

I’m reasonably certain that this is not to be interpreted as a literal command (e.g. that you should press your buttocks against that portion of the room which forms its lower enclosing surface) but rather as a colloquial invitation to join others on the dance floor. So you might as well go ahead and do that.

But always remember that in the end, the most important thing is that it is technically impossible to pump a jam incorrectly, so don’t be shy! Jam pumping is so very rare these days that most of us would prefer even a poorly-pumped jam to a standard jam. 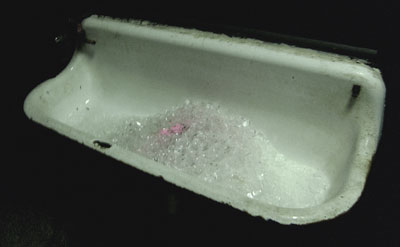 There isn’t much that’s worse than a trough urinal, except maybe a trough urinal filled with crushed ice. Crushed ice? What the hell is the point of that? Is it meant to be refreshing? Ahh, it’s like urinating upon a crystal clear glacier! It’s so pleasant I don’t even realize I’m peeing at all! Let’s get real: Restaurants: Most people don’t want to be peeing into ice. It’s unnatural. I never even pee in snow outside, it feels like vandalism.

I truly can’t think of a reason to put ice in a urinal. Is it supposed to keep the smell down? If so, let me tell you: it doesn’t work. And if it’s to make the environment more pleasant: It does not. Yes, this is certainly some lovely ambiance you’ve created in here, restaurant, what with the complete lack of air conditioning and this metal hog trough sloshing over with putrid urine, crushed ice, and chewing tobacco bolus. Now if you’ll excuse me, I’ve got to get back to my meal. Christ.

So consider this a warning to restaurant owners: Spend a couple of bucks on some regular urinals with dividers, you cheap fucks.

You can either think of it as a childish prank, or a performance art piece for an audience of one, meant to call attention to the absurdity of obligatory politeness and thoughtless greetings in our society.

Either way, it probably won’t win you any new friends.

5. HIRE AN ELDERLY PERSON TO RUN IN THE MIDDLE OF SOME KIDS’ KICKBALL GAME AND KICK AWAY THE KICKBALL

You might think it sounds mean, but really it isn’t. You’re giving the kids (and anyone else who witnesses it) a story to tell. “That time the crazy old man ran into their kickball game and kicked away the kickball” is a memory they’ll cherish for the rest of their lives. Here are a few tips to help you get started.

The Older The Better

This might seem obvious, but you’d be surprised how many people don’t consider age when hiring a complete stranger to ruin a child’s kickball game. But it is important that the person be old, because otherwise they’re just going to come off as sort of a dick. Think of it this way: If a 20 year old sprints in and punts the ball out over a freeway, he’s just some asshole who ruined the game. But it, on the other hand, some 90 year old slowly shuffles in and kicks the ball causing it to roll about four feet, it’ll be pretty hilarious.

I don’t want to get into the whole sexist nature of humor here, but the fact remains that an old man doing something crazy is much funnier than an old woman doing the very same thing. In fact, if an old woman were to run in the middle of a kickball game, she would most likely just frighten the children. Remember: Old man doing crazy stuff = kooky senior who loves life. Old woman doing crazy stuff = scary and sad cat lady with dementia. Hey, I don’t make the rules, I just report ’em.

If many of the children are black (or even mixed race), having an elderly white man disrupt their game would potentially be seen as poor taste. Instead, I would suggest matching the race of the old person with the race of the majority of the children (e.g. black old man, black children). It should be noted, however, that Hispanic and Asian old people are considered “Wild Cards” and can be utilized against any group of children without fear of stirring up troubling racial feelings.

By keeping these pointers in mind, one can assure the safest and most fulfilling kickball-ruining experience possible for both onlookers, and participants.

I hope very much that you’ve enjoyed this borderline incomprehensible commentary on Nothing In Particular. Either this article has served to stave off your boredom for a few moments it takes to skim it, or (and this is far more likely) reading it has driven you to finally decide to take your own life rather than live one moment longer in a world which would allow such a thing to be published.

If the former is the case, I have nothing but pity for you. If latter is true, I make no apologies, but recognize your right to end your own life and wish you good luck on your voyage into everlasting darkness.