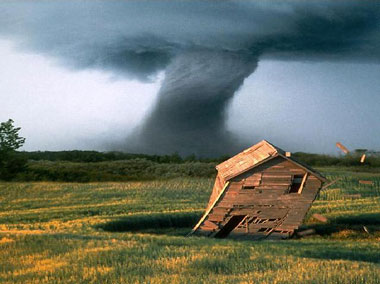 Summer: We all know it's a season, but what some of us may not realize is that with it comes the threat of deadly tornadoes. These whirling dervishes of destruction may seem cute and cuddly at first, but rest assured: They're no laughing matter. Unlike other types of weather, a tornado has little regard for local ordinances prohibiting wanton property damage. Sure, scattered flurries can be bothersome, but when's the last time a scattered flurry flung your doghouse into a nearby lake and impaled your great uncle with a gardening implement? That's right: Never. A scattered flurry has never done that because unlike tornadoes, scattered flurries aren't gigantic weather assholes.

So what can you do to survive an encounter with one of these godless, swirling deathtubes? Well, for a start, you can read the rest of this article for some juicy tornado survival tips.

KNOW 5 THE SIGNS OF TORNADOS 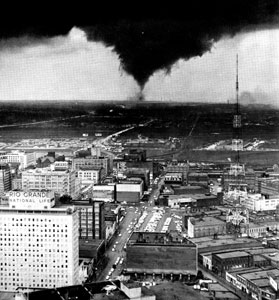 Surprising though it may be, the average Joe Six packs often has trouble recognizing even the most simple signs of tornadic activity. Many of these people will continue fishing, hunting, or whooping-it up in open-sided jeeps even as a funnel cloud reaches down to finger them.

Don't make the same mistake: Learn the signs! It's the only sure way to avoid getting unexpectedly tornadoed.

Forgive me, because I'm going to have to get into some pretty deep-thrusting science here. It's important to learn the basics of weather before taking-on twisters. Air pressure is the first ingredient a tornado needs to be born. Tornados form when there is air pressure in the sky. The air pressure pushes the clouds around for a while. When the pressure gets tired and can't fight gravity any longer, the clouds begin to drop towards the ground. This is how the funnel (or shaft) of the tornado forms. Then it starts tearing up the ground and causing an all-around ruckus.

You might be thinking, "Hey, well how am I supposed to determine something like wind-sheer without the assistance of complex science machines. The answer to this is: You can't, so don't even bother.

Yep, you guessed it. A tornado cannot take place without a funnel cloud in which it can channel it's destructing powers of death. Without a funnel cloud all you've got is a simple low-rank cyclocane (or "thunderbunch" as they used to call them in the old days). If you're wondering exactly how funnel clouds form, you're not alone. I certainly have no idea. Probably nobody does. Maybe try asking a weather scientist or something, I don't know.

Did you ever notice that just before a tornado hits, you feel a blast of cool, dry air in your face? If so: That's pretty interesting, because that isn't what happens. It's pretty obviously you were lying so you'd seem smart. I honestly don't know why you'd do that. Pretty strange thing to lie about...

KNOW THE TYPES OF TORNADOS 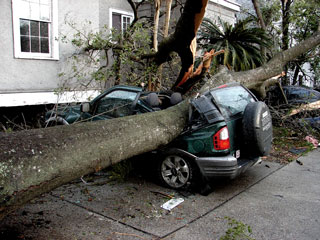 The national weather service ranks all tornadoes on bell curve according to their destructive capabilities. This scale goes anywhere from T0 to T5. Here's each level in detail.

T0: 1+MPH Knocks over paper cups.
T1: 100+ MPH Tears-off sexy nurse costumes and cause bowler hats to go skittering off down the street.
T2: 200+ MPH Smashes-up lean-tos and sheds with ease.
T3: 205+ MPH Grown men are sliced in half with sheets of paper.
T4: 334+ MPH Human skeletons stagger around stripped of skin and muscle.
T5: 2,400+ MPH Hurls skyscrapers and mountains into space. 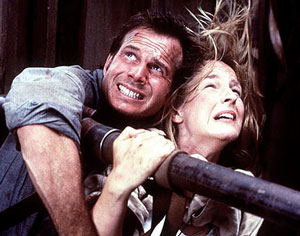 Myth #1: Get Out of The Car and Into The Ditch

This advice is outdated, to say the least. Older cars did not have safety features like crumble zones, antilock-breaks, reinforced I beams, power steering, spring suspension, and V6 engines like modern cars do. This means that the days of sliding into a ditch whilst fleeing a tornado are over! With these features your car will be able to perform better in a rain storm and outrun most tornadoes easily. Also do not forget that tornadoes bring lightning. Cars have rubber tires. Any questions class?

Getting out of your car during a a lightning storm is a one way ticket to deathtown. Population: You (and everyone else who ever died, I guess).

Myth #2: Take stairs instead of elevators during a tornado

Consider this: Elevators are designed by science to help their occupants survive an over 10,000 story fall. Why exactly are you getting OUT of the elevator during a tornado? Duh, take a clue pill, private dumbo!

If you took a moment to question what you've been told instead of behaving like a sheep, you'd stay-put in one of these movable bunkers of security. I've hear tell of entire building crumbling to dust leaving only the elevator (and its occupants) to tell the tale.

This is complete nonsense and probably stems from the liberal media's bias against the non-rich. A trailer house (or properly secured) can be one of the safest and cheapest ways to ride out a tornado. And while it's true that Tornados have been known to scoop-up trailers and toss them onto a train track, at passing barges, or into some ravine, this is fairly uncommon. Many of my relatives and lovers have resided in a trailer castle (as I affectionately call them) and as far as I know, none of them have never had any problems dying due to tornadoes.

Welp, that's all I've got on tornadoes. I sure as heck hope you've have enjoyed learning about tornado safety with me. Be careful out there, friends.