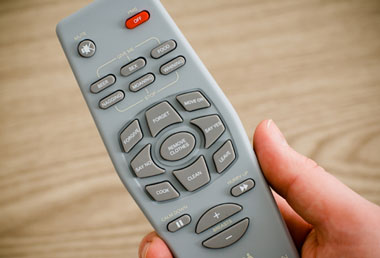 Whether they're being subjected to perfectly acceptable physical abuse for failing to have your dinner ready on time, conforming to misogynistic stereotypes about driving ability, or drowning their infant children in the bathtub due to severe postpartum depression and psychosis, women can be a real handful!

But luckily the geniuses at Taipei Novelty Product Production Assembly Line #124038 have come up with THIS KOOKY GAG REMOTE for all those "guys" out there who just want to "watch the big game with their buddies" without being forced to acknowledge the existence of the "perpetually exasperated vagina-possessing nursemaid" to whom they have allowed themselves to become emotionally attached.


Let's take a look some of the key features of this remote in-depth.

While men may no longer be encouraged to shackle females mentally (or even physically), they can still celebrate their chauvinist heritage by purchasing cheap, nonfunctioning television remote controls, pointing them at a nearby woman, and pressing the "rewind" button while imagining her slipping backwards through time, donning a thick, woolen dress, and then reluctantly acceding to joyless, mechanical intercourse while holding back tears. Hot!

Buttons to increase or decrease breast size on women!? Talk about hilarious! Don't worry if you don't get the joke, it's some pretty subtle satire. See: It's funny because men are said to enjoy large breasts!

In the good old days a woman was seen and had sex with, not heard. Unfortunately due to so-called "advances" in "human rights", women can now speak their minds, sometimes wear nonrestrictive clothing, and vote. So what modern man wouldn't want a "mute" button which, if pressed, would instantly transmogrify that shrill, emancipated harpy you married into the robotic Maxim model of your dreams!

This group of buttons perfectly encapsulates the three main duties of any woman who resides in your home. It is important to remember that women are simple-minded creatures, and can not be trusted to perform any overly complex tasks which do not involve either nurturing or laundry. Any man who has allowed his woman to "try things for herself" (be it the resale of slaves, the repair of a leaky water closet, or the piloting of a motorcar) know that it will always result in the female breaking down in tears of rage at her apparent impotence...pretty funny, right fellas!?

Perhaps someone could create a "control-a-man-who-thinks-the-control-a-woman-remote-is-hilarious" remote as a sort of response. Some of the buttons could be:

FINAL SCORE: 0/10 PLANET JUPITERS
If this remote was a planet, it would not even be close to being the planet Jupiter.
Tags
Product Review
Review