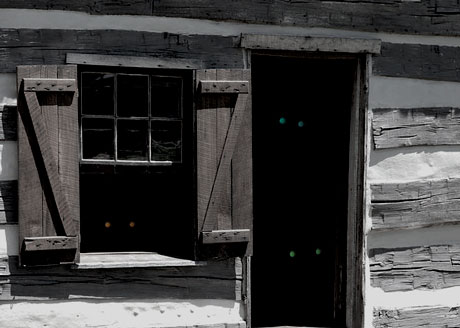 Open on the interior of a small log cabin.

MA is at the stove, stirring a large steaming pot. APRIL lies on one of the beds reading a book.

The front door bangs open and snow billows in as PA enters, wearing his polarbear-skin coat and carrying a small chunk of wood.

His beard is caked in ice.

PA: I'm home! I brought this wood I chopped for the fireplace. Boy oh boy, a man could freeze to death out there! Life sure is hard in the old frontier times.

MA: You said it! I've been slaving over this wood stove for thirteen hours just to make us a tasty meal for dinner. Luckily I'm almost done.

APRIL: It isn't even a pie! She's stirring a bunch of stuff around in a pot.

MA (Sadly): Well it was GOING to be a pie, but the only ingredients I had were acorns and nettles. I figured I'd boil them up and we could just pour them into a pie crust. But then I realized we didn't have any pie crust, so I figured we could just use a bowl as the crust and eat it out of that.

APRIL: That's just soup! What you're describing is soup! You d--

APRIL and MA stop talking. PA raises his index finger to his lips, and then cups a hand to his ear theatrically, listening.

PA (Whispering): I think I heard something.

There is silence for a time. Then, the mournful howl of a bear echoes in the night.

Several more bear voices join them, and soon there are a bunch of bears howling all at once.

PA (Narrowing his eyes and shaking his head): Not just bears, my sweet...werebears. I can tell from the howls.

PA: There's isn't time! Someone needs get out there and fight them!

APRIL: What do you mean there isn't time? You're standing right there, just turn arou--

PA: Curse your foolish ovaries, un-male! I ordered you to be silent! Now as I was saying, one of us is going to need to venture out and fight these unholy beasts.

MA: Well I certainly can't do it since I have to watch this pie. If it boils over, we'll all starve!

PA: And sadly, I'm really tired from carrying this wood from the backyard. There's no way I could even battle one regular bear, let alone seventeen or eighteen werebears, which is the approximate number I heard howling out there.

MA: Oh woe is me! If only I hadn't sent all of my sons into town simultaneously to purchase large bolts of fabric and dry-goods and such!

APRIL frowns. She looks back-and-forth between her parents. She shrugs.

APRIL: Whelp, I guess it falls to me then. Fear not parents, for I, your only daughter, shall go out and fight all of those bears.

PA: Don't be absurd! What can you, a mere girl of twenty-and-three, hope to do against a pack of rampaging nightmares such as these?!

APRIL pays him no heed.

She straps on a bandolier, strides over to the weapons chest, and begins arming herself.

The bear howls grow louder and louder and once and a while one of the bears makes a weird huffing sound like it's laughing or something.

The lever on the front door begins to jiggle up and down.

MA: Heavens to Betsy! One of them is using the doorknob!

APRIL pushes between them, armed to the teeth.

She has a blunderbuss in one hand and a silver-plated tomahawk in the other.

Several other blunderbusses are strapped to her bandolier.

A large barrel of moonshine is slung over her shoulder.

She wearing a coonskin cap and puffing on a cigar.

MA: Oh no you don't! Not in my house, young lady! You put that out this instant!

APRIL: But mo-ommm! It looks cool! And I neeeeed it!

PA: Now now, you heard your mother. Put it out. You can light it again once you're outside.

APRIL rolls her eyes, snubbing the cigar out on her arm without even flinching.

APRIL: Hold on to your butts.

PA: I really have no idea what that means.

APRIL sprints to the door and crashes through it with a flying kick.

The WEREBEAR behind it is flung backwards into the trunk of an ancient oak.

The WEREBEAR is impaled on a branch, and the trunk snaps like a toothpick.

Six or seven WEREBEARS leap from a nearby bush and begin to run towards APRIL, growling and slobbering.

APRIL spins around for no reason and then takes aim at the nearest one with her blunderbuss.

She fires off a shot and the WEREBEAR falls to the ground, still sliding across the ice.

She tosses the blunderbuss aside and leaps onto the WEREBEAR'S back and begins surfing on it, dropping the rest of the onrushing WEREBEARS with blasts from her remaining blunderbusses.

MA and PA stand in the doorway, cheering.

The bear APRIL is surfing on slides to a stop.

WEREBEARS are dropping out of the trees all around her, bellowing and snarling.

They converge on her position, surrounding her, but do not attack.

Suddenly a WEREBEAR pushes through the crowd and steps forward. He is a large brown bear, and is wearing a hat.

PA: Look out! That one's got a hat! I think he's their leader!

APRIL gives the WEREBEAR LEADER an apprising glance and then runs up the trunk of a nearby tree and does a backflip.

While in the air, she clicks her heels together and two large knives spring out of the heels of her boots.

She lands on his head, the blades of her knifeboots sliding into his skull, killing him instantly.

Also his hat gets crushed.

The other WEREBEARS, enraged at the death of their leader, begin to swarm around his still-teetering corpse in a bloodthirsty frenzy, swatting up at APRIL with their enormous paws.

PA: Aaaieee! Look out for those paws!

But his warning arrives too late.

One of the paws strikes APRIL in the thigh, and she falls into the swarming mass of bears.

MA (Covering her eyes): She's done for! I can't watch!

The group of WEREBEARS is now a black maelstrom of flying fur and teeth and claws.

Snarls and bellows and the sound of crunching bones fills the air.

Then, suddenly, APRIL'S head pops out of the WEREBEAR MAELSTROM, and she crawls out of the swirling mass of bear on her hands and knees.

None of the bears seem to notice. She stands up and lights her cigar, playing it cool.

Her coonskin cap is gone, but she is otherwise unharmed.

She waves a handkerchief at the swarm.

The WEREBEARS freeze in place, turning their heads to look at her.

In their midst stands the large barrel of moonshine. A crude face is scrawled on it, along with the word "April", and the coonskin cap is perched on it's lid.

The wood has been punctured in places and moonshine is leaking everywhere.

APRIL smiles and takes one final puff on her cigar, turns towards them with a wry smile, and begins to speak.

She trails off, her brow furrowing. The werebears (and her parents) look-on expectantly.

APRIL: You know, ursine, like the scientific name for bears!

PA: Oh I got that, but it doesn't mean anything. It's borderline nonsensical.

MA: Are you going to force them to drink?

PA: Those bears aren't going to drink that moonshine! Look, it's just going all over the place.

MA: Maybe they'll lick it off their fur. Is that what you meant honey?

PA: That's not enough to get a bear drunk, let alone a werebear, if y--

APRIL suddenly flicks the cigar into the pack of WEREBEARS, setting the moonshine ablaze.

There is a tremendous explosion and a blinding flash as all the WEREBEARS are blown to bits.

As the dust settles MA and PA are chuckling and shaking their heads.

PA: I'm sorry I doubted you, daughter. You've proven yourself to be as strong and brave as any man, if not stronger.

MA: I agree wholeheartedly. In fact, we no longer have any need for those sons of ours. They'll just be dead weight. Quickly, let's pack our things and leave before they return and ruin everything. Oh, and also I got pregnant several years ago and had triplets; three girls. We sent them off to live in the forest since we didn't value women, but now they're back: Look!

MA: I'd like you to meet your three sisters: Bess, Sassy, and Lil' Frankie.

SASSY: It's nice to finally meet you!

LIL' FRANKIE: Great to be back sis!

PA: I am cowed and have been dethroned from my position as the patriarch of this family. I expect I'll only get in the way. Y'all go on without me and create a better world.

PA runs off into the forest.

MA and APRIL and BESS and SASSY and LIL' FRANKIE look at each other and shrug.

Everyone shares a laugh as hunks of burning wood and charred fur rain down around them.

The camera freeze-frames on their laughing faces.