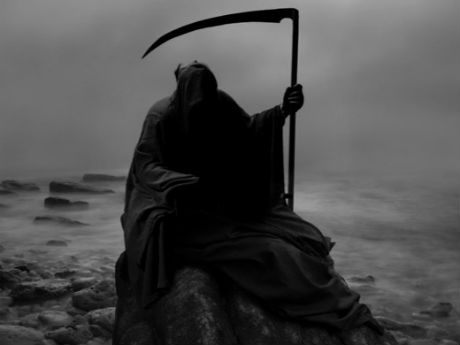 There are two things of which I am certain. The first is the inevitability of death, and the second is that the majority of human beings will end up saying at least a couple of words within their lifetime. When examined individually, neither of these events seems particularly significant. Death: You're walking along the beach and a small blonde boy drops dead in front of you? Somewhat troubling, but really no big deal. Hearing someone say various words? So what. Not surprising at all. Unless you're deaf. Then it'd probably be pretty shocking. Well, unless you're a deaf schizophrenic. Then you might not be too shocked by some disembodied voice.

Although...what if you were a schizophrenic who's been deaf since birth? Then you wouldn't even know what human speech sounds like. So if the voice of, say, Micheal Landon popped into your head one morning and started muttering things like "Chew on that baby's arm", "Start a fire in the public library", "Those dogs are laughing at you again", or "Masturbate into an aquarium" it would just sound like gibberish. You wouldn't even know it was the voice of the dreamy-eyed heartthrob who played "Pa" on Little House on The Prairie (and "Teenager Who Gets Turned Into a Werewolf" in I Was A Teenage Werewolf) you were hearing, so the fear you felt wouldn't even be mitigated by whatever fond childhood memories would've been conjured up by hearing that voice. Anyway, just some food for thought.