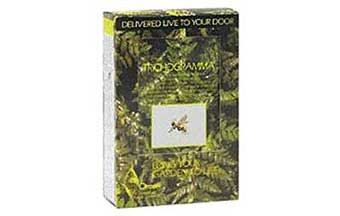 I don't think I'm exaggerating when I say that this box of organically protected Trichogramma parasite larvae is a must buy for those whose plans for world domination hinge on the cultivation and subsequent release of thousands of tiny Hymenopteran insects.


Speaking from personal experience, I can tell you for a fact that it is far easier to purchase the insect eggs in bulk and raise them from there, as opposed to attempting undertake the complex and hazardous task of wasp husbandry on one's own. Sure, it may sound easy, but until you've actually constructed a makeshift insect breeding enclosure using empty cereal boxes, heat lamps, and a cool mist evaporation wick humidifier; you'll never know just how grueling it can be. It's far simpler (and economical) to simply purchase the insects wholesale for use in whatever terrifying scheme you've cooked up.

For example, I had built a tank-and-impeller bodysuit out of old diving equipment. The idea was to fill the reservoir with Trichogrammae, which could then be directed at my enemies though a specially designed set of tubes which extended out along my arms.

Unfortunately, after working up a prototype I quickly discovered that this design had a number of glaring flaws, chief amongst which being that Trichogrammae are less than a millimeter in size and have no stingers, meaning that the only conceivable way they could have brought harm to a human was through asphyxiation (by clogging the throat in great numbers). And even this was hypothetical.

But it's important to point out that I'm not blaming the product for what are essentially my own failings. If utilized creatively, these larvae would be an excellent asset to any discerning fear monger, assassin, or biological terrorist.

FINAL SCORE: 8/10 DISAPPOINTED OGRES
These ogres are disappointed, but you can see why. These eggs are no good.